skip to main | skip to sidebar

Peter Higgs, as in "Higgs Boson"

When you make arrangements from a different timezone, on a different continent, from several thousand miles away, people and places become an abstraction. So, despite the fact that I had hired a Scottish videographer, made arrangements to meet Dr. Higgs, and printed maps of his house in Edinburgh, it was still something of a shock when I actually found myself shaking the hand of Dr. Peter Higgs in his living room with the videographer at my side.

The videographer was great --- he set up quickly while Dr. Higgs and I talked in his kitchen. He seemed to be a widower, living in a flat with his daughter, who apparently was an artist. The place had stone floors and 15-foot ceilings, and all the rooms were painted in vivid, rich single colors. The kitchen was pumpkin orange, the living room deep green. He said his daughter did all of that, and sometimes he wondered about the colors, but was content to trust her with it. He was soft spoken and extremely modest, downplaying his role in formulating the theory of the Higgs boson, despite the fact that the thing was named for him.

The videographer called us in and we sat down. Dr. Higgs was a little nervous, and part of his nervousness was expressed in his answers; I think he felt as though he had to delve deep into the scientific realm to respond to my questions. Consequently, many of his answers were extremely long, and extremely technical. This was our very first interview, and although I had interviewed many people in the past, I had never asked questions about things I had such a tenuous understanding of --- I must confess that I only understood the very surface of his responses. 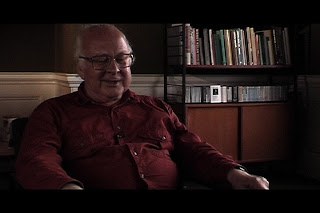 Some scientists are extremely gifted at speaking in metaphor, in using examples from everyday life, or in gauging what parts of an answer need to be scientific and what parts blend into the philosophical. Dr. Higgs did not seem to have developed this ability; perhaps he had never needed to. Consequently, I'm not sure how much of the interview is useful, and I'm afraid much of it is my fault. Looking back I feel as though I could have done a better job of guiding him towards answers that made more sense to more people, although when I did ask him to answer the question "what is the higgs boson" using non-scientific terms, he seemed completely flummoxed. He started and stopped a couple of times, and then gave up. Luke, our visual effects director, said that most likely that was the best part of the interview. I think he may be right, not because there's anything especially appealing about watching a scientific genius stammer at a loss for words, but because it seems to encapsulate our struggle with the challenge of making this documentary: how do you tell the story of something so complicated and scientific that only a few people in the world can actually understand it?

It's a challenge that I relish, and the key lies in the people involved with the scientific ideas --- even if we can't understand exactly what the Higgs boson does, we can understand how important it is. Even if we can't grasp the scientific principles of the search, or the technical processes involved in searching, we can understand the passion of the people searching for it. At the same time, I feel as though it's important not to run away from the scientific, from the techinical. That part of the story, for me, is like poetry; the beauty of the universe being discovered.

At the same time, sitting there with Dr. Higgs, nodding as if I understand what he's saying, I can see the potential difficulties. While people can lose interest in something they don't understand, they lose interest even faster when it's something they don't care about. A pervading theme in our film addresses that directly: why should we care? Why should we care about the Higgs boson? Why should we care if it is found? In an age and a country in which material benefit is so important, in which research is assigned importance by its potential ability to raise money and generate marketable technology, answering that question can be difficult. Our culture seems to tell us that pure research, the search for knowledge and understanding, the search for how the universe works, becomes less and less of a satisfactory answer to those questions.

For me, and for us as we make this film, the answer to the question "why should we care?" lies in how much each person we talk to cares. There passion, their drive, transfers to us. Even though we can't understand exactly what they are searching for, we all can understand the passion of searching for something crucial to our lives. We can understand the quest for knowledge, the search for answers, because we've all been passionate about finding our own answers to our own mysteries.

And, we realize we may be making a leap of faith. We might be making an assumption of our audience: that they believe in the importance of learning, of discovering, of knowing. That a scientist doesn't have to defend the purpose of scientific exploration. Scientists have gotten used to operating with that assumption in place, both in the public arena and in government. There are so many important contributions to our culture, to our society, and even to our civilization that to list them would be unnecessary.

And yet, in today's culture, that leap of faith, that assumption, may be more and more naive. We all watch the news as America seems to be coming to odds with it's scientific legacy. Many people, ordinary Americans, are rejecting important scientific milestones such as Darwin's work with evolution, the importance of preserving the environment, and elevating the need for military research and spending over nearly every other kind of scientific inquiry. So we find ourselves returning to the question, and to the scientists, to say, "no, really, why SHOULD we care?" It's a question the scientists are not used to being asked, and not used to answering. It has occurred to me more than once, and to all of us making the film, that perhaps this is our main theme. Part of the rich tapestry of our story is, in fact, the way science struggles to answer a question it is not used to being asked, and the ways in which a culture is changing that it should demand such an answer.

None of this was going through my mind in Peter Higgs' living room, however. I was simply struggling to keep nodding, to plan when I could jump in and nudge him this way or that way, hoping the videographer had enough light, wondering if his audio levels were good, and wondering if I were getting anything usable out of this interview. I knew I would have plenty of time to contemplate the larger questions involved in making our film.

When we finished, I thanked Dr. Higgs profusely for allowing me to speak with him, thanked and paid the videographer, grabbed the video tapes and caught a cab back to the train station. It was breathless, and exhilerating --- I found myself thinking, "I could get used to this." If only our fledgling non-profit had an overseas travel budget.
Posted by Clayton at 7/15/2004 11:13:00 AM

Leon Lederman had a tv program a few years ago that sort of followed the story ot the "God Particle."
I would love to get a copy of the program. I have searched PBS and Nova but have had no luck finding same. Any clues would be greatly appreciated.
Rob Daniel
rdaniel2@sbcglobal.net

Peter Higgs should call his particle the Godless/Satanless particle.

Say, what do ya think of moi's lill' film/research?

i dont know science and i dont do religion. but i am so intrigued by what i've read over the last few weeks about the higgs boson.
and i am so keen to see what becomes of the atom smasher, and the god particle - particularly if it exists and what it means.
hopefully this interest is stimulated in lots of other people, like me, who dont know anything about science. it sounds like it will be huge.

I THINK ALL THINGS IN THIS EXISTENCE HAVE AN EXPLICATION AND A REASON. IF WE DICOVER THE LAST ELEMENTS IN THE MATTER PROBABLE WE´LL KNOW THE BEINNING...

In order to understand what reality and the universe is, we first need to understand the quantum world, everything originates from the very small, that is what the ancient cultures knew and tried to pass on to us.

At some point couple of instructive online journals turn out to be extremely useful while getting pertinent and new data identified with your focused on zone. As I discovered this blog and value the data conveyed to my database. Kilkenny Event Photographer

Clayton
Clayton is a documentary and narrative filmmaker interested in exploring the hidden stories and compelling characters that emerge when people pursue their passions. A graduate of Northwestern University's Master of Fine Arts program in film, Clayton has received several awards and seen his films screened across the country and internationally. His films explore what happens when fascinating characters, real or imagined, are caught in curious obsessions. He is co-director of the award-winning documentary "The Atom Smashers" which was broadcast on the PBS series Independent Lens. Clayton teaches film production at Northwestern and is a co-founder of 137 Films, a non-profit documentary production company telling stories found in the world of science.